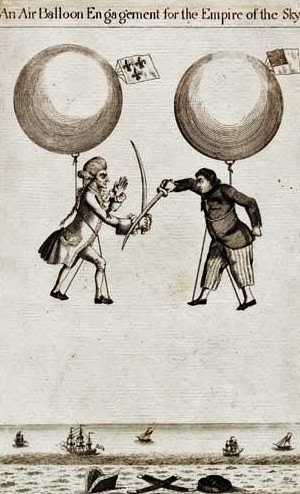 Here's an idea for a duel: The duelists are tied to small alchemical air balloons (I added 'alchemical' instead of 'hot' so we don't have to stick to real-life science here!), which are in turn linked together by a rope so the duelists remain within striking distance of each other.
The rules are;
1-  As soon as they are released from the ground, duelists go up in the air. (Just how fast they do so will depend on how much the balloons were filled, so DMs can decide. If duelists are in heavy armor, for example, then one imagines they'll rise slower.) Once it stops rising, it will remain at a certain level for a while. (Once again, DMs can decide how long they want this to be.) When it starts dropping, it will alchemically replicate the Feather Fall spell for a number of rounds equal to twice the number it's been rising previously.
2- Traditionally, duelists are supposed to hear the blow of a horn from the ground before they start fighting.
3-  Ropes have 2 HP, both those holding the duelists and the one linking the balloons together. If a duelist wants to cut the linking rope he'll need to have a longsword or some similarly long weapon at the very least, a dagger won't reach. It cannot be destroyed with bashing weapons and such unless on a critical hit.
4-  If a duelist wants to strike at the rope holding the other duelist, calculate the rope's AC as two points better than the person it holds. (One imagines the character will get in the way and because of that, armor bonus is still relevant.)
5-  If a duelist wants to strike at his opponent's balloon, he needs a weapon long enough to reach it, once again a longsword will do the trick but a dagger won't. The balloon will have an AC 4 points worse than the person held to it.
6-  An alchemical air balloon will have 6 HP. (It has different compartments so a single hole will not cause all of the balloon to be emptied right away.) It cannot be damaged by bashing weapons except on a critical hit. If the balloon is damaged, it will no longer continue rising nor stay in place if it was done rising, treat it as alchemically replicating the Feather Fall spell. This effect will last the same number of rounds as it has HP left after the first hit. Any further HP damage will equally lower the amount of rounds left.
7-  If a duelist has destroyed his opponent's balloon but not the link between the balloons, it will force the remaining balloon to go lower as if it had simply spent all its time up like in rule 1.
8-  If a duelist is cut from his balloon, he can attempt to grab onto his opponent with a Saving Throw before falling to his death. The still-attached duelist can then try to push his opponent off with a contest of Strength. (Or you can apply any wrestling rules you like if you prefer.)