World of Warcraft: ICONS - The Tauren 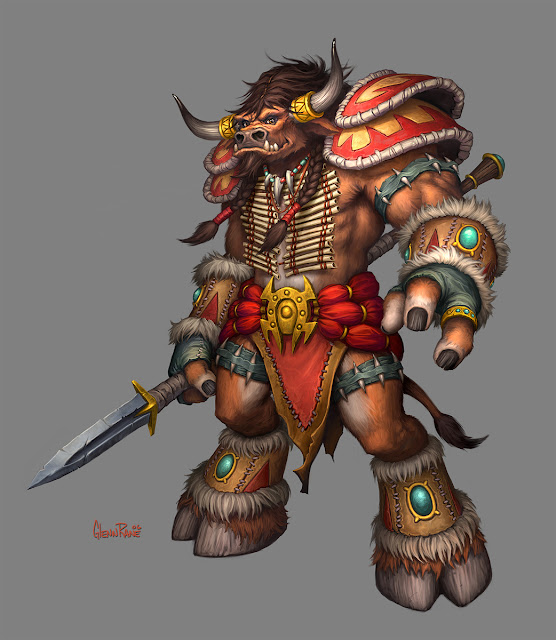 O.k, since my last post about using ICONS for a tabletop RPG set in the World of Warcraft was basically just me saying "Hey, this system would work pretty well for this!", here's an actual example of how I would apply it. It's very simple.

Here are the Tauren's racial traits, taken from WoWWiki: 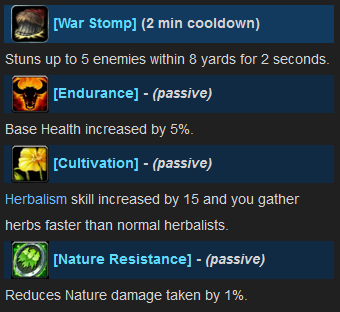 Simple as that! I'd basically tell players to take their Racial Traits first, and then they can choose their 'Class' powers. I wouldn't feel a strict need for players to replicate a starting character in WoW, since the needs of the MMORPG don't reflect exactly how things work in the lore. For example, if someone wants to make a Goblin Engineer, I wouldn't demand that they also choose a Class from the game. Plus players can always replicate Class Skills they might not have access to yet via Stunts.

Just a quick idea here, but it occurs to me that ICONS is well-suited to replicate something like a high-powered Fantasy MMORPG at the table in a storytelling-focused way instead of mechanically. <Insert 4th Edition D&D jokes here.>

The way I see it is that ICONS already has everything to replicate all the racial traits, abilities, skills and powers you could find in the game.

You want to make a Draenei Warrior with the Gift of the Naaru? No problem. A Goblin Engineer with outlandish gadgets? Easy as pie. Magic objects and weapons would obviously be devices too.

Honestly I don't even see the need to come up with house rules here. I would simply say, use the optional point-buy system in this case, refer to the Warcraft games and/or lore when creating characters, and you should be fine. (For example, yes you can make a Tauren with a Strength of 7, but not a Gnome with that same Strength, or at least not without the right device/explanation.)

P.S: Yes, I know there was an OGL game for Warcraft/World of Warcraft but it's out-of-print and many things are not up to date with the game as we know it now, even by the time Burning Crusade came out.