Idea for a Low Life Adventure: Explorers from Another Time! 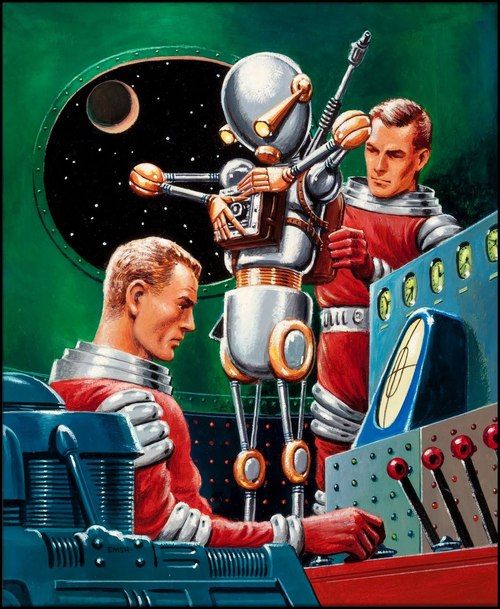 This is an idea I've had for a while, but first of all I'd like to specify it requires players with a good sense of humor and able to roll with the unexpected.

So you grab your Savage Worlds book as well as the Science Fiction Companion and tell your players you're gonna run them an old-school sci-fi game of Flash Gordonesque aesthetics. You tell the PCs they can play robots and even friendly aliens as per the books, but at least one Human would be a good idea. Heck, maybe you even run them a story or two of classic sci-fi adventures to set them at ease.

The idea of having the sci-fi specifically be a cheesy old-school one is so the players will retain a certain sense of humor about the whole thing and not feel too betrayed when the twist happens; They come across a black hole, are dragged into it and find themselves in... THE WORLD OF LOW LIFE, set in their own distant future! (With their ship too damaged to fly again at that point of course.) 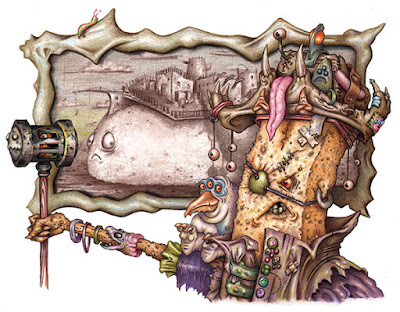 Truth be told as hilarious as this idea is to me, it does have a bit of a railroady aspect to it in the sense that it assumes the players cannot avoid the Black Hole for this twist to happen. There's a few ways to deal with that.

- You don't run games previous to this event, the game starts after their characters have already been through the black hole as background. It is recommended you initially drop them in a spot without intelligent beings in their immediate presence and with monsters that won't betray the comedic tone of the setting right away. As they move closer to civilization, they start to understand this isn't the game they thought it would be...

- You can also openly let your players know from the start that some of your ideas might include an event or two they won't be able to avoid and promise them bonus Bennies for their temporary loss of player agency when the time comes, as well as the promise that it won't be a recurring thing.

- You could use Low Life's Oith as a Ravenloft-like place they visit temporarily before finding a way to escape from it, the 'Weekend in Hell' type of adventure. (Weekend in Heck?)

For those familiar with the Low Life setting, you might now see why I mentioned at first at least one Human would be recommended for the adventure. How would the visit of such a being affect Oith's civilization? Maybe it doesn't at all, maybe everyone thinks the Human is the weirdest Bodul they've ever seen. Maybe the mere presence of a Human or two starts a local religious war (and if it does it should really be based on ridiculous notions regarding the PCs and their looks and habits).

This idea doesn't have to be for sci-fi only, I hear magic portals are a thing in Fantasy... Again, just make sure there's at least one Human in the group. For giggles.
Posted by Bruno at 06:41 No comments:

Sharing these photos of my home-made DM Screen. If you like it, the photos show the process, tools and materials used to make it (in no particular order). I got all the pieces and materials at Dollar store. If you have questions on how I made it or suggestions to make it even better, feel free to comment. 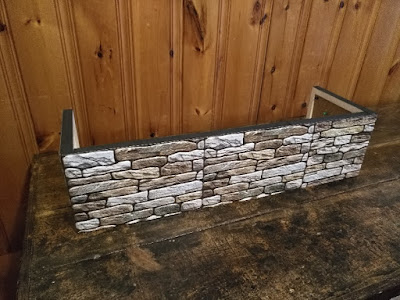 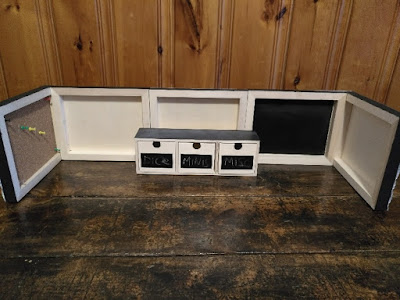 The inside has blackboard sections and one corktile side. 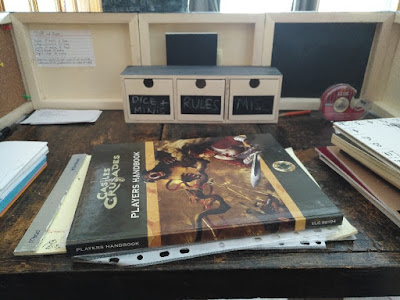 I use the blackboard on top of the drawers to mark initiative during combat. 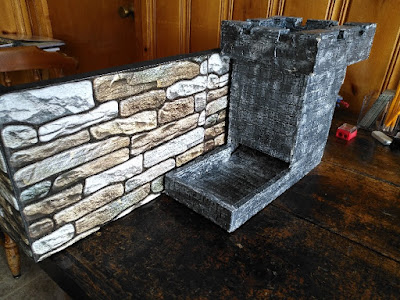 The Dice Tower a friend made for me happened to be just the right height! 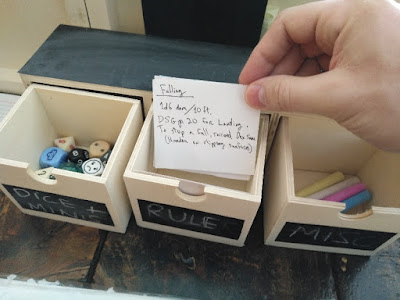 Quick rules references for less book-browsing mid-game. Not done writing them all yet! 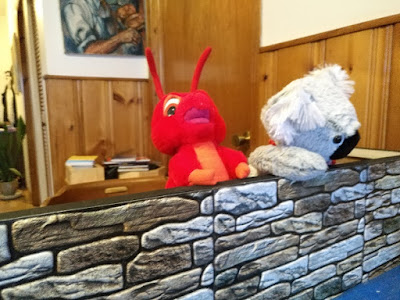 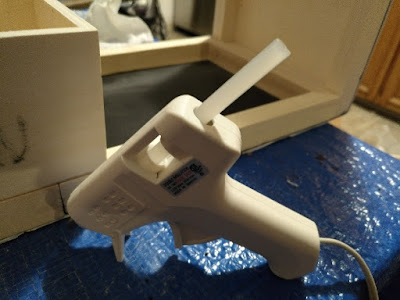 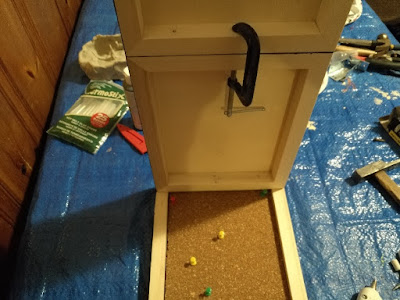 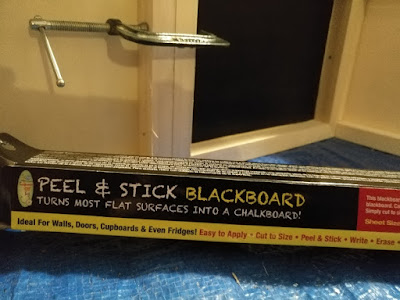 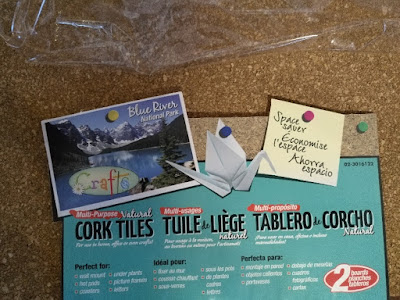 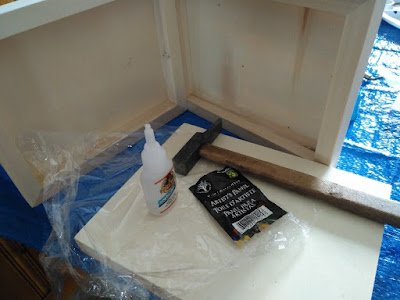 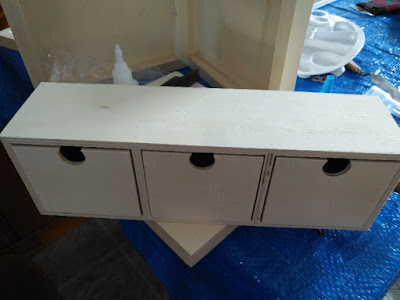 The drawer box was its own thing at the store, I didn't build it from scratch. 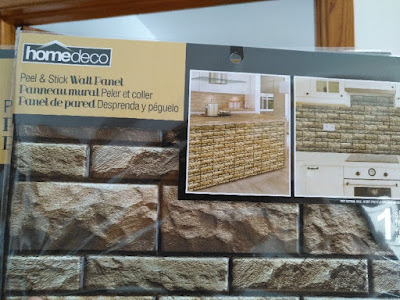 The first store I went to had more modern-looking walls. I found the more medievalesque ones after. 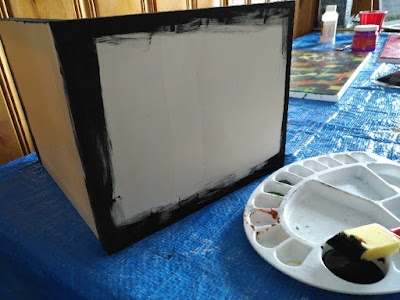 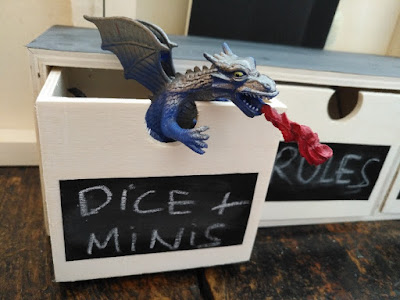 House Rule for Humans and Half-Elves in 'Castles & Crusades' 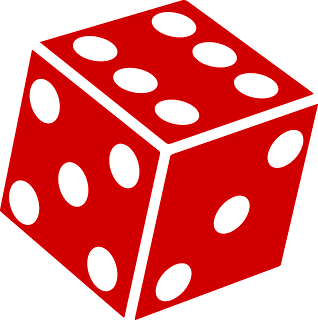 First a somewhat long side-note/introduction/rambling to explain why I'm House-Ruling those Races in the first place as well as my thoughts on how I came to this idea. If you just want the House Rule simply go to the end of this post, really.

So I have been running my D&D campaign for many years now, using the 'Castles & Crusades' system. As far as OSR systems go, it's my favorite.

It was the one that first used the OGL to return to a more Old-School style. It was the first to use the Saving Throw as a skill check. (Attribute checks basically do almost everything in the game in fact.) It involved every single Attribute to specific saving throws, making no attribute a bad choice. It's super easy to use with pretty much everything OGL/D&D out there.

It does a lot for me as a DM. I don't have to worry about skill points for NPCs. It separates Race and Class which I personally prefer. It doesn't make starting PCs a bit too powerful for my taste (Looking at you, 5e. Which to be fair I would have bought if C&C didn't exist already, it really is a nitpick.) It doesn't have those Level Limits I hate so much. (Although they forgot about the implications of removing said limits when it comes to Elves and the Wish spell!)

I know some people dismiss it because the SIEGE engine is often criticized. I myself am not an adherent of the SIEGE engine, where all Saves start at 18 except for Prime Attributes (all characters get to choose 2, except Humans who get 3) that start at 12. Instead of the saving throw Target Numbers going down as characters level up, players get to add their level to their die roll. It's pretty much the same thing really, except the numbers on the Target Numbers never change that way. As you can imagine, saving throws for Level One PCs on non-primes are kinda tough since you need 18 or higher to succeed. Since you get to add your level even at Level one I guess one could say it's 17 but still pretty tough, and that's for most of your saves unless you're a Human, then that's 50% of your saves. On top of that, for years I thought that if you were rolling a saving throw against a monster's special attack, its HD was a penalty to your roll, although today I was trying to find that rule somewhere and couldn't find it, so maybe I got it confused with the rules for Turning Undead and for Saving Throws vs Spells. I digress big time.

Anyway, I was turned off by the SIEGE Engine because it made Saving Throws a bit too harsh in my opinion. I decided to go the route of other OSR games, set the initial TN at 15 for all Attributes and then lower them by 1 every level. Simple, yet it removed the advantage of playing a Human and to some degree a Half-Elf raised by Humans in the game.

My solution was the use the rule of Basic Fantasy Roleplaying and give Humans a 10% bonus to XP (5% for Half-Elves raised by Humans.) Except I recently read this. My initial reaction was to consider increasing the % bonus to XP, but I figured now might be the time to get rid of the extra math while calculating XP for every PC and over the years I've noticed that playing a Human was slightly boring. Why not fix that and go back to what C&C was doing to an extent without using the whole 18/12 system?

So basically Humans get a +6 to one of their saves over other Races, and Half-Elves raised by Humans get a +2. If the initial TN is 15, putting a +6 on a Saving Throw roll seems a bit too good. Spreading the +6 as a +1 for every Attribute felt m'eh. So I could split the +6 bonus into two bonuses of +3 for Humans. But I was reminded again of how BORING it is to play a Human in many OSR games. I wanted something that would make it feel fun, even if in a very superficial way.

5e has the advantage idea of rolling two d20s and picking the best one as your roll, but an advantage won't allow you in any case to go over a TN you previously couldn't beat and I already use the advantage idea when I don't feel like coming up with a proper numerical bonus to something. It just wouldn't feel like this special thing only Humans have. Still, rolling more dice is fun, so maybe I can take that +3 and replace it with 1d6. On average it's the same thing, but it's more exciting.

So Humans have Human Spirit: 1d6, where they can choose two Attributes that will get a +1d6 bonus every time they roll them. And following that premise, Half-Elves raised by Humans get Human Spirit: 1d4 for one Attribute. When rolling with Advantage, only the d20s are multiplied, not your Human Spirit die.

Please let me know what you think!
Posted by Bruno at 18:17 1 comment:

Dwarves in 'Lamentations of the Flame Princess' 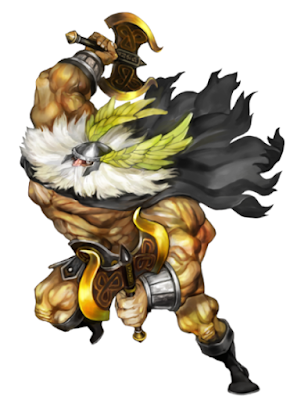 Just a quick observation that I made a while back regarding Dwarves in Lamentations of the Flame Princess.

Normally in most versions of D&D, Dwarves have a slower movement speed , as do Halflings. The latter are described as 'swift' in LotFP, so they're given a bonus to their Dexterity modifier and a bonus to their AC. No comment regarding their movement speed, which actually means they move the same speed as a Human. Same goes for Dwarves. (And it's interesting to also mention as a quick side-note that the traditionally agile Elves are given no Dexterity modifiers in this game, they can be as clumsy on average as Humans can.)

That makes Dwarves, by default as soon as encumbrance comes up, the fastest Race in LotFP.
Posted by Bruno at 16:56 No comments: