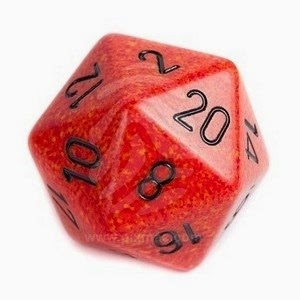 Just a quick post about how I house-rule Castles & Crusades in my new ongoing campaign.

I got rid of Primes and different Target Numbers. All TNs are at 15 by default. Players no longer add their level to their rolls, instead the TN goes down by 1 every level. (So at level 2 the TNs would be 14, etc) Apply the same modifiers you normally would. (Constitution modifier v.s poison, etc) Monster/enemy HD no longer applies as a penalty to rolls. The lower a TN can go is 4. (That last one I might tweak over time, but as my players are level 1 still, I'm in no hurry to ponder that.)
To make up for the lack of Primes, Humans get a +10% XP bonus (This idea was taken from Basic Fantasy Role-Playing) and Half-Elves of Human Lineage get a +5% XP bonus.

Also, while gold for XP is a fun way to gain XP for treasure hunters and such, it's not exactly the best way to handle things for truly heroic characters. Thus, after they complete the next dungeon I'll be applying the following rules to reward XP: http://akraticwizardry.blogspot.ca/2009/07/are-you-experienced.html