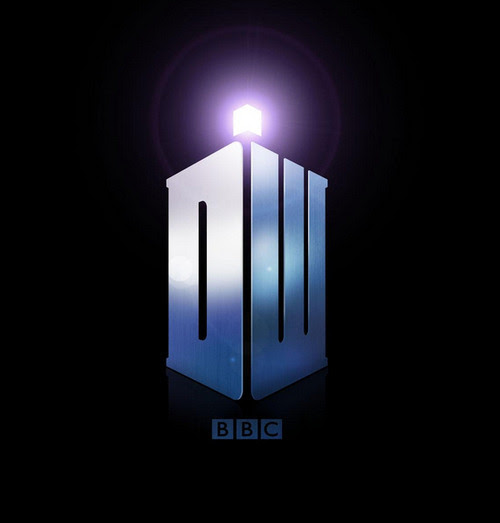 Ever had an idea that you really like but you also feel kind of embarrassed of having? In a "How old am I???" sort of way?
Yes well, I'm having one: A Live-Action Role-Play set in the Pre-Time War Whoniverse.
Why Pre-Time War? Why, so that everyone can be a Time Lord! (Although playing a Companion would be a totally valid thing to do too!)
It's just a silly idea that I'll probably never actually do, but here are some brainstormed thoughts without a specific rules set to go with;
- If it's a one-time thing and not an ongoing game, you could have all the players be different incarnations of the SAME Time Lord, in an event so cataclysmic that they come together despite that it'd normally be forbidden. (If there are more than 13 players, the remaining ones can be Companions or different Time Lords.)
And yes, incarnations can be of a different sex and/or race from each other! (So every time you read 'Time Lord', consider 'Time Lady' to be an equal alternative in this text.)
Each incarnation's number is written on a piece of paper, along with important information about said incarnation. The higher the number, the more information is on the paper (normally). Some later incarnations could even have dark secrets that they keep from earlier versions (Spoilers!), in the vein of John Hurt's Non-Doctor. Logically everything on Incarnation #1's paper would be on #2's with extra information, but it need not be the case. For example, something might have happened to a later incarnation where they forgot some things about their past. The Third Doctor had the knowledge of how to time travel removed from his mind by the Time Lords. (Although this would arguably be 'extra information' on the paper; "The Time Lords have removed the knowledge of how to time travel from your mind.") If you want an incarnation to truly have forgotten something for any reason... Simply don't put it in the paper. It could get interesting when an earlier incarnation mentions it, thinking that an older version of him/her would surely know of that already! But these are just some ideas, you can keep it simple by simply having older incarnations know everything the younger ones know. Even that can be complex in itself though! What if a certain Companion is actually a traitor who'll someday betray the Time Lord? An older incarnation would know it, but they'd be unable to warn their younger self without changing events! (More on that later.)
When the players arrive, give them an incarnation's paper at random. Then when every player has his/hers, ask them to present themselves in order so players can know the order of who they'd remember being (younger incarnations) and who they wouldn't know yet (older incarnations). However, they should NOT share the information on their papers before playing starts.
The game organizers would have to determine ahead of time how 'wibbly wobbly timey wimey' stuff works for the game, such as 'What if an incarnation dies, how does it affect the older ones?'.  A suggestion is that given the damage being done to time, the death of a younger incarnation does not affect the older ones YET. In fact, should the incarnations succeed in fixing things, all the ones that died should be brought back to their respective time lines unharmed. Something along those lines.
For a game like this, make very sure that every player understands they are not playing the Doctor. While their clothing can be influenced by the character, they should not dress as any of the Doctor's incarnations.
- Spoilers!: Another idea would be that Time has a certain amount of 'Health Points', which you can rename however you want. (The term wouldn't be used directly in the role-play itself, instead being referred to as 'The fabric of time' or anything else you find fitting. "If I gave you information about your future, it could damage the fabric of time!" That means that if players choose to do things they shouldn't be doing (Like warning an earlier incarnation of their Companion's future treachery from our earlier example) it would reduce Time's Health Points. Also, if the players can't stop the bad guys from accomplishing certain evil goals, more Health Points are lost. The game is lost if the fabric of reality is damaged beyond repair. (If it reaches zero Health Points) Certain actions would give Health Points back, while others would simply prevent further deterioration. That would be for the game organizers to consider and prepare.
- Companions wouldn't be as competent as a Time Lord but would give bonuses to any of the Time Lords by their presence. Their suggestions, support and faith in the Time Lord or any other reason you want to come up with encourages the Time Lord to go further than they normally would. Getting kidnapped or into trouble might even give the Time Lord even higher bonuses, since he/she will now be more motivated than ever to save their trusted friend! (Said bonuses could be removed if a game organizer thinks the companion got kidnapped on purpose to give said bonuses!)
-Sonic Screwdrivers. Let's face it, many people will want to have one. Let them. However, they will need a prop. They can either buy a toy... 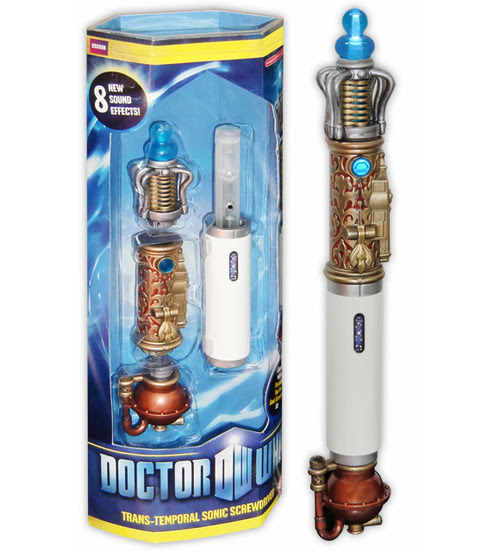 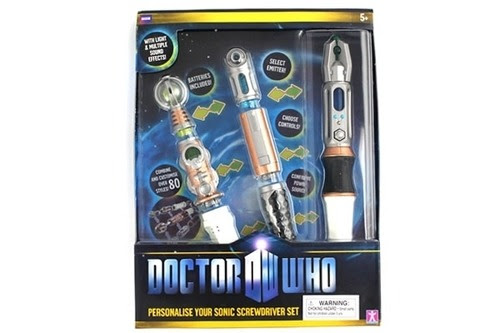 ...or make their own home-made prop. That said, having a sonic screwdriver is very helpful and should cost character points. (Not all incarnations of the Doctor used one, maybe they wanted to put more points into other places!)
- Building a TARDIS console or even a whole control room would be a really cool thing for the players if you have the time and space to set it up.
That's it for now, please let me know what you think! :)
Posted by Bruno at 00:38 No comments:

'Add Your Own Fluff' D&D Cursed Item: The Dragon Cloak 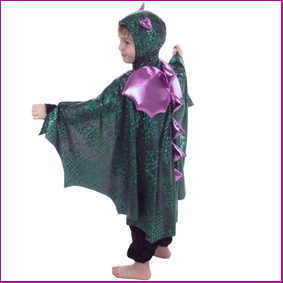 Imagine something like this, but less cutesy and on your adult adventurer.
O.k, so the Dragon Cloak is a very simple magic item; normally a cloak, but also sometimes a cape or even a set of wings, made from the corpse of a generally medium-sized dragon (although some editions of the game allow for magic items to change their size to fit their new wearer, so how big the deceased dragon actually was might not be relevant).
The magnificent Dragon Cloak allows its wearer to fly around like a dragon of his size, according to the color of the dragon used to create the cloak. It must be worn with countless leather straps all over the body to carry the wearer's weight properly and with the arms inside the sleeves that go along the wings. The hands will come out from holes at the end of the sleeves so the wearer can still hold objects. The arms will simply go into the sleeves as a magical effect that takes no actions, even if the wearer was holding something that normally would not have fit through the sleeve. (Like a sword.) Since the wearer is actually flapping his arms while flying, some penalties should apply while attacking with held weapons in flight.
But there's a catch! If there happens to be an actual living dragon in the proximity of the Dragon Cloak while it is being worn, the Cloak will take flight on its own or change direction mid-flight to head for the dragon! The wearer will have no control on the Dragon Cloak as it rises to deadly heights. Because the arms are inside the wings while flying and the body will be held by all those straps, the adventurer will not be able to free himself/herself by any conventional means. If there's more than one living dragon in one area, the Dragon Cloak will head for the most powerful one.
Have a nice flight! 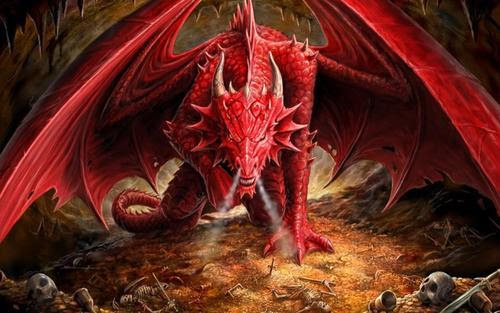 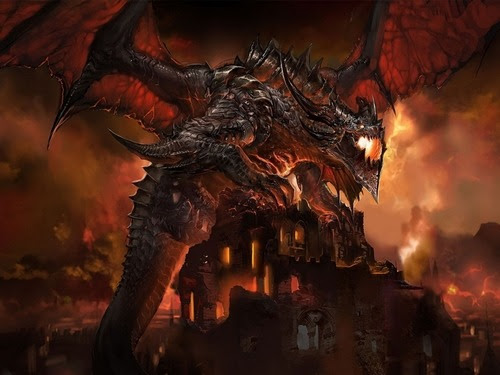 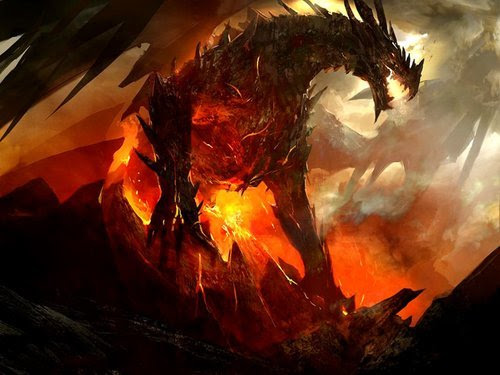