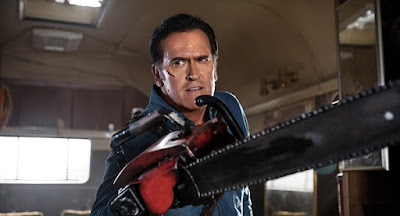 Promised One/El Jefe
This is my Boomstick!!!
Chainsaw for a Hand

More Machine Than Man
Chosen One
Dark Lord of the Sith
Posted by Bruno at 16:30 No comments: 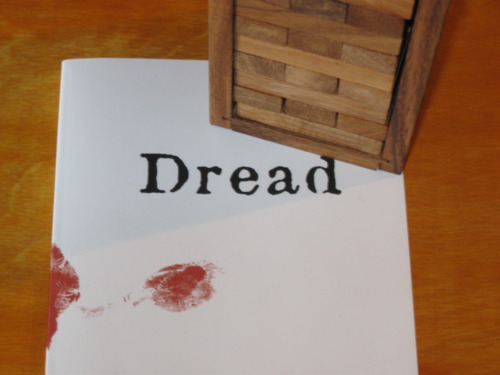 Here's a fun idea for a horror LARP; Using the Dread RPG rules, which make use of a Jenga tower instead of dice.

You see, the rules of Dread are all about players pulling blocks out of the tower when they attempt things, so imagine an in-doors LARP with a Jenga tower in every room available to players. When someone needs to attempt an action or at the behest of a GM, they do as they would normally do in Dread. (All block pulling should be done in front of a GM.) Different rooms could have different levels of difficulty too. For example, a room could have a tower with many blocks already removed to indicate it's a creepy place, while a place that is safe has a full tower with no blocks removed yet at the beginning of the game.

Example: Two players in a haunted house scenario walk in and see a tower that has many blocks removed. One of them says "We should go... This place feels unnaturally cold."

In other words, instead of trying to avoid meta-gaming regarding the state of the towers, make the fact that players can see the them part of the experience. ("I have a bad feeling about this!")

As a fun side-note, it can actually explain why in a horror story the party is split so often! Players won't want to all start pulling from the same tower because the odds of it falling down will increase faster, but they won't have any back-up if things go wrong afterwards either!

I got two requests to follow-up on some ideas explored in ICONS-centric posts I made, one about using the system for Warcraft RP and the other regarding an example of the system in play in my final ICONS review. Let's do this. 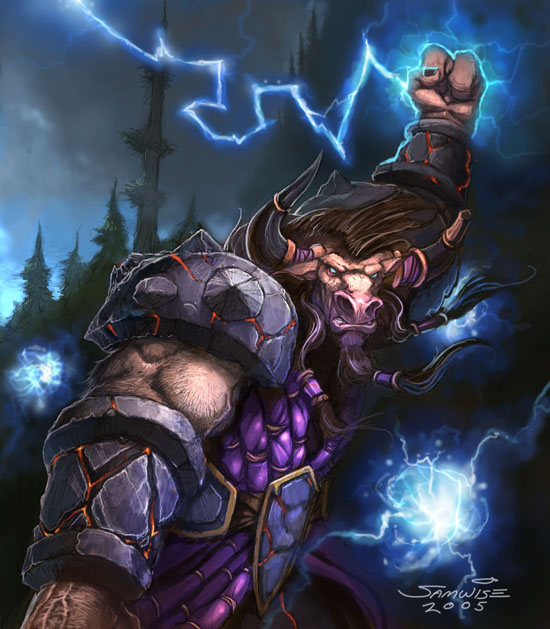 Here are three Class Skills for the requested classes and how I'd translate them into ICONS.

Hamstring: 'Strike' with 'Binding' as a Mastered Stunt  In the MMORPG it slows the target down, but in this case it would be a little more efficient since it can fully stop an opponent.

Bladestorm: 'Aura' with an appropriate Limit so it doesn't become a main form of attack and remains a special attack sort of thing. Limits that make sense for this are 'Burnout', 'Degrades' or 'Tiring'.

Water Walking: Super-Speed (Extras: Surface Speed -water only-, Affects Others, Limits: Extras Only.) This one got weird, so let me explain it. The only place where I saw the ability to walk on water was with Surface Speed, an Extra to Super-Speed. By taking the Extra Only Limit, I nullify the super speed and remain only with the ability to walk on water. Except Water Walking can also Affect Others, so I add that, except it's now two effects, which kind of abuses the 'Extra Only' Limit... So we remove walls from the Surface Speed extra, basically we put a Limit on the Extra to balance things out, which also works thematically since Water Walking should not allow people to walk up walls too. Ta-daaa.

And now for another example of interpreting a comic-book scene using ICONS rules! 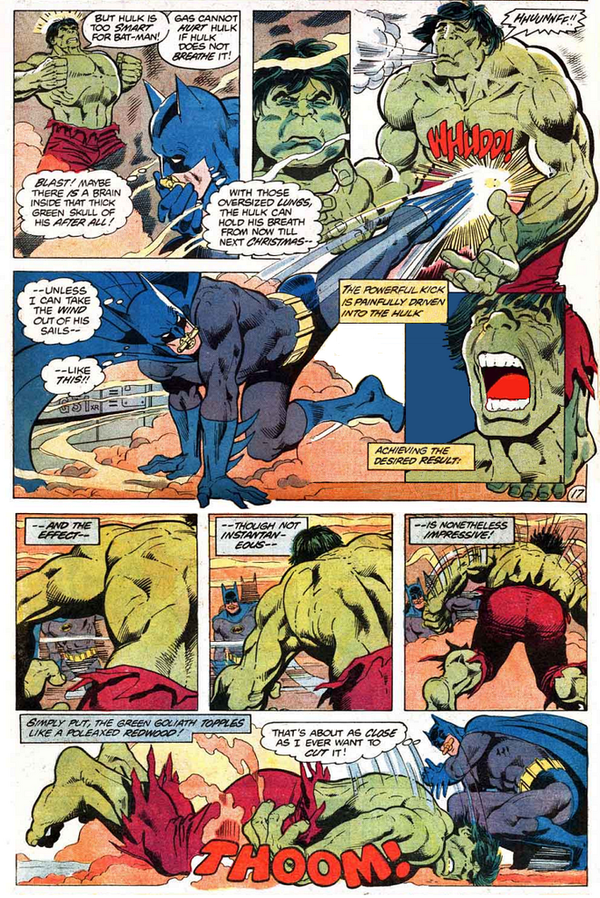 Oh yeah, I'm going there!!! Batman vs Hulk!!! And believe it or not, under ICONS rules, it's actually a pretty fair fight! Let's work this out.

At first, Batman has used his Gadgets power to replicate Stunning, rolling vs the Hulk's Strength... And the Caped Crusader gets a Moderate Success!!!

"But Hulk has a Strength of 10 for sure!" I hear theoretical nay-sayers exclaim. And he sure does, but Batman's Gadgets power is also up there. And the dice rolls probably were on Batman's side. Now, you'll notice that story-wise Hulk seems to simply have resisted it, but notice also how he doesn't do anything else during that page? The narration is going with what makes sense story-wise and explains it that way, but in fact per the rules, Hulk is stunned for one page and that's why he's just standing there holding his breath and not attacking Batman or doing anything else.

So while Hulk just stands there stunned per the rules and holding his breath per the story, Batman decides to do a Stunt. I'm giving him a Prowess of 7, but even if someone would claim that Batman shouldn't go over the human limit, we can all agree he has the Martial Arts Specialty at Master level anyway, so he can Stunt away no matter what his Prowess is. And his Stunt of choice is replicating Stunning again.

Batman justifies to the GM that since the gas from his Gadgets use would still be in the air, he tries to kick the Hulk in a way that won't physically hurt him but will force him to draw in air and thus breathe in the sleeping gas. He also uses Improved Effort because he has to roll against Hulk's Strength. Batman actually has the advantage here. Hulk has a Strength of 10, but if you add up Batman's Prowess (+7), Martial Arts Specialty (+3) and Improved Effort (+2) you get a 12!

The rolls go in Batman's favor again and Batman gets a Massive Success, incapacitating Hulk for the Chapter!
Posted by Bruno at 20:02 No comments: 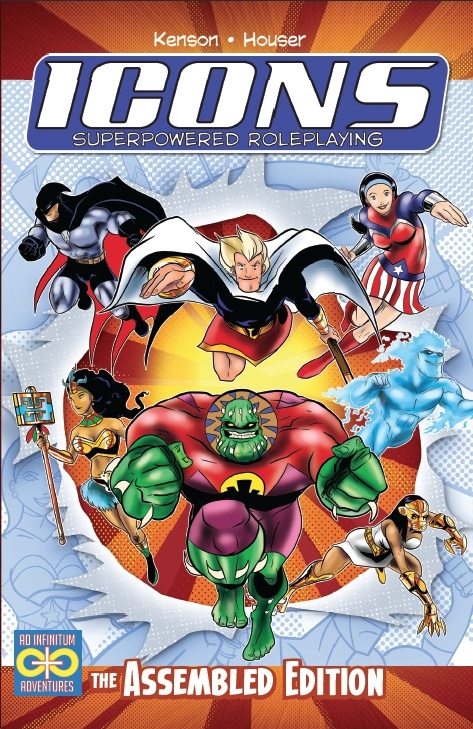 This one's really good. I want to start with that right away because my impression after the first game I ran was actually negative.

I ran more ICONS games since then, and I gotta say that once you know how to use its narrative-driven rules, it works VERY well.

So the short review is: If you want a superhero RPG that feels just like the comics do, get this one.

And now for a more complete review:

This is the one superhero game I know of where characters of different power levels can play together and it still works. I'm not saying it's always perfect, but of all the superhero systems I have played, this is the one that can actually make it happen. (I'm not claiming that it's the only superhero system that accomplishes this as I haven't tried them all.)

During my initial negative first impression I complained about the apparent fragility of heroes without physical powers. I didn't realize at the time that the system allows every character to narratively replicate such powers via the Stunt system. (A character hiding behind a tree, for example, replicates having armor, etc.) So this system actually makes it possible for Batman to single-handedly stop the White Martians... 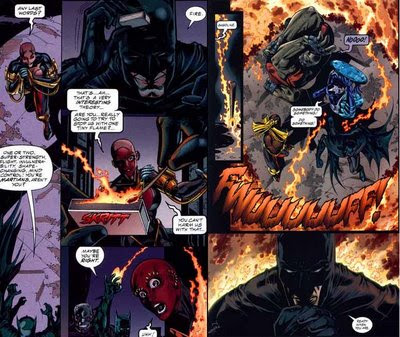 In this example, Batman took a Page of preparation and used his Gadgets power (Simple Gas and matches in this case) to replicate the Nullification power, taking away the powers of the White Martians. Story-wise Batman's player uses the White Martians' weakness to fire to accomplish this, since all of their powers have the 'Blocked by Fire' Limit. One could argue he used two Pages to also replicate Binding so the White Martians couldn't go anywhere, as they are surrounded by the fire. As for how he deduced their weakness, he probably used his 'World's Greatest Detective' Quality.

While also leaving the possibility of a normal human knocking him out. And it all works with the same rules. 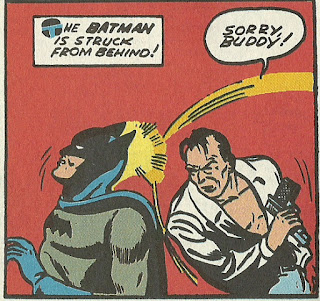 Here, a criminal knocks out Batman with the butt of his gun. Either he managed to attack Batman by surprise and so the Dark Knight couldn't react and took the hit like a normal human (his cowl was not armored back in those days) or the GM actually informs him he's been knocked out by surprise without any dice-rolling and gives the player a point of Determination to use later if Batman's player accepts the Trouble.

So already just in that regard, this is very comic-book-like. I love it, now that I understand it.

1. Any players who struggle with what to do on their turn in games where the options are pretty simple, and/or who need to have a specific and complete list of what they can and cannot actually do, might actually have trouble using this system to its fullest. To be blunt, that will be more of a player problem than a system problem, but it's still relevant to point out.
2. It is a PAIN to find rules in this book. Looking for how to do something will send you back and forth through the book because many rules are used in unison. There are no specific pages given for where to find rules either, just whole chapters. The good thing is that once you know them you don't need to look up in the book that often because the rules are not difficult per se, but for the first few games where you simply don't remember all the details, expect a few pauses in the game to look up how something works, and to be looking for it longer than you would have with a more complicated system. I find that ironic.

GMs, you know your group. I think most players will love the fact that they can come up with new ways the use their powers on the spot, or argue about how their story-centric Qualities might affect the narrative and/or give them a bonus in certain situations. It also encourages the players to accept setbacks and you'll even have occasions where players themselves point out flaws their characetrs have and suggest how it could work against them because they will be rewarded for it with Determination points. (Which they can use to their advantage later on.)

I think most GMs will love that coming up with NPC stats is ridiculously quick. I can, no joke, create a bad guy NPC with really complex super-powers in maybe 5 minutes, and that's including the time it takes to write down the stats and such.

ICONS is now my go-to game for superhero RP. I don't feel bad about my initial first impression because I do think it's a mistake in the book's editing, where it didn't make things easy to find, but nevertheless now that I am familiar with it I cannot recommend it highly enough.