'Add Your Own Fluff' Cursed Item: Helm of Spying 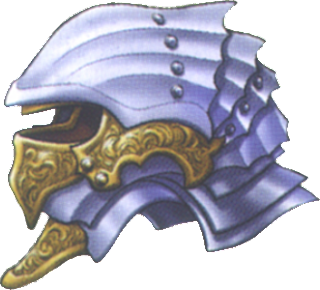 What it seems to be: A helm that, when put, activates whatever spell is used to spy on others in your game system of choice. It works for anyone, not just spellcasters.

What it actually is: It does work as previously mentioned but for one important detail; The helm itself is not really magic, rather a magical spirit resides within it, a spirit that can read the mind of its wearer (no save allowed) and relishes in feelings of betrayal. If the helm wearer uses the helm to spy on someone they trust and/or care about, the helm will show something that is not actually happening that will lead the helm wearer to believe the other person is betraying them.
For example, if a helm wearer uses it to check on his wife, the helm might show her cheating on him with a trusted friend or even an enemy of his. If he uses it to check on an ally, he might see that ally selling information to an adversary.
In the same vein, if a trusted person actually IS betraying the helm wearer, the spirit will give a vision of the person acting in a completely trustworthy way.

'Add Your Own Fluff' D&D Cursed Item: The Fusing Longsword. 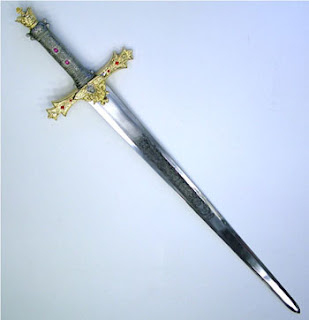 Place this cursed longsword decorated with gold in a treasure pile, sit back and wait. This particular cursed item is cruel for two reasons. The obvious reason is that it's cursed, but the other one is that what triggers the curse is the next critical hit rolled by the player character wielding it!!!
It will be all the more glorious when the player's initial joy at getting a critical hit is met by the DM with a "Roll a saving throw against..."! (Fortitude for 3.5 -you pick the DC-, Magical Device for old-school games, etc)
If the player fails his roll, his hand(s) become(s) permanently fused to the sword! (To state the obvious, whether it's one hand or two depends on how the character was holding the sword.) Gauntlets or gloves will not stop this effect, in fact they will be fused along with the hands to the handle of the sword. And to clarify, one can't just cut the skin around the hand or nonsense like that; the sword doesn't become glued to affected hands, they merge together, bones and flesh magically melting around and into the sword handle.
Even if the player manages his saving throw, once the curse has been initially triggered it will now require a new saving throw for every successful hit, no longer just with critical hits. Giving it to someone else will reset the trigger for that person, but not for anyone who triggered it before and uses it again.
To be fair though, the character now cannot be disarmed of the sword, the fusing causes no damage since it's magical and the successful attacks that trigger the curse still take place normally otherwise. There's no reason to be mean to players. ;)

So you're a DM and there's this thing that your players are unaware that still calls for a saving throw. Let's say someone poisoned their mugs of ale with a sleeping potion that won't take effect right away. You ask them to roll for Poison without explaining more. Or you roll a die yourself while hiding the result (the 'good' ol' DM secret die roll!) and look at their character sheet. Or if you're sneaky enough, you roll a die yourself and look up the saving throw value discreetly/have it written somewhere/remember it. WHATEVER! To quote Rocky Balboa, "Let me tell you something you already know!" (+100 xp if you read it with Stallone's voice in your head); The players now suspect something and will behave differently, even if they genuinely try not to meta-game.

Oh what's that, you sometimes roll for nothing so they won't know when you're rolling for real while grinning so they'll be scared or something? That gets annoying really quickly. "Oh look, he's rolling AGAIN while grinning, same as he did five minutes ago." And if instead you don't roll them often but sometimes you roll to bluff so they won't know when it's real, they'll still change their behavior anyway because it doesn't happen so often that they'll ignore it!

So what's a DM to do? I dunno for you, and maybe you'll even tell me you like the methods I've just dissed and that's fine if you do, but this is what I did the other day: I took a sheet of paper, asked every player to roll their d20 (for saving throws) a few times while I wrote down the result of each throw. Then I asked them to do the same with a d6 since the game I'm running uses them for skill checks. What does that accomplish?

Well, I take notes often. If players see me putting pen to paper, they don't know what I'm checking. They don't know I might be scratching off one of the dice results. If you think even that might give a hint, then simply remember where you are in the list of pre-thrown dice rolls and scratch off the used ones later after the game or when no one is looking.

Players will finally be none the wiser.
Posted by Bruno at 01:31 No comments:

Aerynn Ivillios the Druidic Avenger (And Barbarian and Scout and…)

Before I start sharing the adventures of my D&D character Kelleck Mage-Hunter, I’d be remiss if I didn’t mention the other player character in that game, Aerynn Ivillios! Aerynn is a half-elf… Well, he’s lots of things but story-wise I just say he’s a Druid/Barbarian. Stats-wise though… Oh boy! He’s even more complex than Kelleck is, with variants and multi-classing and whatnot! (And obviously, our DM doesn’t use the multi-classing XP penalties!)
Unlike with Kelleck, I’m not going to mention all the sources but the main one is the 3.5 version of ‘Unearthed Arcana’. There’s also some stuff from ‘Dragon Magazine’ in there and the ‘Holt Warden’ Prestige Class comes from ‘Complete Champion’.
Our two characters are currently at level 9 and I forgot what his latest level was in, but at level 8 Aerynn was a:
Druidic Avenger 1/Fighter1/Half-Elf Paragon 3/Lion-Totem Barbarian 3
Whew, that was a mouthful! The ‘Druidic Avenger’ and ‘Lion-Totem Barbarian’ are variants found in ‘Unearthed Arcana’. On top of that, he chose a nameless variant of the Druid from the same source which removes theWild Shape class feature for other benefits in return. So his Druid class alone actually contains two variants!
He took two Flaws at character creation, which granted him an extra Feat each. The Flaws are: ‘Gullible’ and ‘Love of Nature’.
His current Feats gained from level or class are (in the order he obtained them):
Level 1: Combat Reflexes, Furious Charge, Power Attack
Level 2: Intuitive Attack
Level 3: Powerful Charge, Quick Draw
Level 6: Greater Powerful Charge
Level 9: Hurling Charge
If Aerynn survives to see Level 20 (where the game will finish according to our DM) he’ll be a:
Druidic Avenger 9/Fighter 1/Half-Elf Paragon 3/Lion-Totem Barbarian 3/Scout 1/Holt Warden 3
Posted by Bruno at 23:43 No comments:

'Add your own Fluff' D&D Magic Item: The 'Save v.s Death' Knife 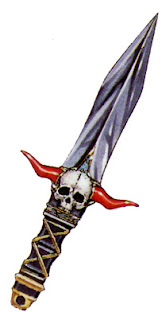 So this is the idea; A magic knife that anyone stabbed by it has to roll a Saving Throw v.s Death or die. However if the target succeeds in their roll, the wielder of the knife must then make the same Saving Throw or be the one that dies! You know, because the knife is hungry for souls.
Anyone killed by the knife can only be brought to life following the destruction of the knife. (How the knife can be destroyed is up to whatever system your specific version of the game uses or the DM's own personal ideas.) Alternatively, you could use a Wish spell to get the soul out of the knife and then use whatever other spell (including Wish again) to bring the victim back to life.
Its magical effect won't work on the undead, constructs or any other opponent who's already dead and/or soulless. Those will only receive the normal 1d4 damage. The knife will still try to take the wielder's soul in such a case, it hates being teased with the promise of a new soul to devour only to find there's nothing to take.
I can see this object being used as an 'all-or-nothing' weapon against opponents that the player otherwise doesn't stand a chance against. Which is a gamble in itself since a tougher opponent will very likely have a better Saving Throw than the player. If it's used before being properly identified, it could also lead to some very surprising situations for your players...
Posted by Bruno at 01:02 No comments: