In Indiana Jones and the Kingdom of the Crystal Skull, Indy survives a nuclear explosion by hiding inside a fridge and riding the shockwave within its apparently sufficient safety.

As an experiment with the ICONS Assembled Edition ruleset I wanted to test if it was 'possible'. I'll admit at first I was gonna throw the math into it and expect to end up ruling that 'Indy just can't survive that explosion per the rules and actually needed to spend a permanent Determination point to explain how he escaped after all.' as per the 'Back from the Dead' rule in page 44.

Let's start with the fridge. The GM rules that no Retcon is required for it to be there, since Indy is inside a kitchen after all. The Material Level of the fridge would be 4.

Let's continue with the Nuclear Explosion. In page 118 it says that a target with Level 9+ resistance to Damage, Heat and Radiation can survive the nuclear blast if he can make a Strength test against a difficulty 10 killing outcome.

The GM rules that the fridge can offer protection against Damage, Heat and Radiation, but at the Material Level of the object which is 4. Is Indy done for? Not so!

Before we continue, here are Indy's relevant stats for this post: Coordination 6, Strength 4 and the Athletics Specialty at Master level.

Indy's player has to use a Stunt, and he only has time for one because of the countdown. Indy's about to 'ride' a nuclear blast within a fridge, so he decides to try an Athletics Stunt. Problem is, there are three powers to replicate/boost to even be allowed a shot at surviving with a Strength test, Damage Resistance, Heat Resistance and Radiation Resistance. The fridge only covers 4 levels of each. That would normally require three different Stunts. Indy's player argues that maybe all he needs to replicate is the Adaptation power once inside the fridge, since that will be his environment in a way. The GM agrees.

Indy makes a Stunt test of 1d6+9 (Coordinaiton 6 + Athletics 3) to replicate Adaptation at Level 5. Indy succeeds, the 5 levels of Adaptation plus the 4 levels of Resistances form the fridge add up to 9 levels all together.

But that doesn't mean Indy survives, it just means he now has the right to roll to see if he can survive... a difficulty 10 Strength test! 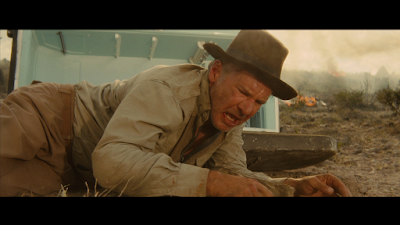