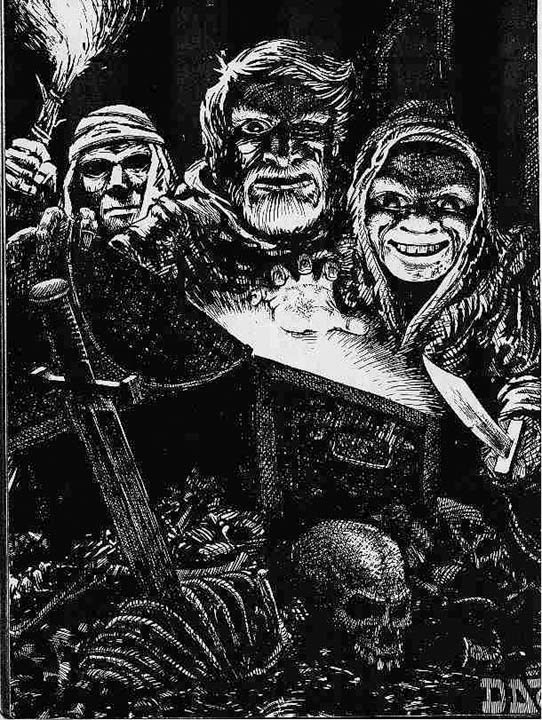 Because I wasn't over-thinking treasure enough! (Maybe a side-effect of not having considered it enough before, leaving my players XP-starved.)
While 'Lamentations of the Flame Princess' recommends spreading the treasure over a dungeon and even hiding some of it, 'Crypts & Things' recommends the opposite, placing it all in a single hoard at the very end of the dungeon so as to keep the pacing fast.
Both have merit. I think I prefer the LotFP method though, because it encourages the players to come up with solutions and pay attention.
Here are two anecdotes from one dungeon; I'd placed treasure in a spot that the players had to climb to reach. They then had to deal with bringing the treasure down with them without damaging it and having it lose value. I hadn't thought of a solution myself, I just placed a problem in their way and watched them deal with it. It turns out they had looted some bed sheets earlier (Thank the Mother of All Treasure Tables for that randomness! Thinking about it now, they probably should have rotted over the years, but I digress.) and they used them to catch falling treasure undamaged!
In another spot they could see glowing golden coins inside a small, dead-end tunnel that only the Halfling could crawl through. They decided not to send anyone in the tunnel and both magic-users simply used Mage Hand to grab a handful. They left the rest there. (Which also led to a discussion with another friend when I told her the story and we argued about whether the spell could be used like that or not.) There might have been a trap or they might have walked away from easy-to-get treasure. They didn't know for sure, but it was cool that they had to think about it and that there was uncertainty and discussions amongst them regarding that.
None of that could have happened if the treasure was just all in one hoard at the end of the dungeon. Even pacing-wise I guess it will depend on each group. Some players will find that a variety of events will make for better pacing (fighting, looting, searching, picking up hidden treasure, moving on) than just a series of continuous fights. Other players will want to have as many fights as they can get in their gaming session. (And in the defense of 'Crypts & Things' the hoard at the end trope does fit with the style of story they are trying to emulate. I am mostly discussing personal preference here.)
Overall I prefer the LotFP way, but I had started to think maybe it would be best if for the next two treasures, on top of adding twice what I'd normally put to make up for the previous lack of it, I could simply just have all the treasure at the end of the dungeon 'Crypts & Things'-style to make sure they'd get all of it.
That would be one way to handle it. But then again, LotFP mentions that placing all of the treasure at the end forces the players' hands. If the treasure is at the very end, they can't just decide when to leave the dungeon if they consider they have enough treasure for now. Well they can, but then they will miss out on most of the XP and will only have that from killing monsters and avoiding traps to show for it. (Not much.)
Someone recently commented in my 'OSR Leveling' post that OSR dungeons often have rooms with unguarded treasure.
I think that for the next two dungeons I'll be mixing those three ideas to make it easy for my players to catch up on the XP they should have by now. I've already mentioned that I'll be placing double the treasure in the next dungeons. Half of it (In other words, the amount I'd normally place.) will be spread along the dungeon as usual, with some of it hidden or well-guarded by monsters and/or traps. The remaining half will be split into two 'sets' of bonus treasure. One bonus set will be in empty unguarded rooms and the other will be a hoard at the end.
If they survive, my players should be caught up by then.