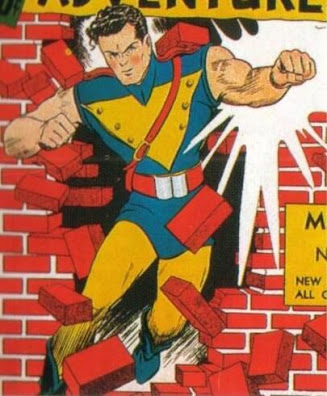 Concept: Carlton Clarke, an unassuming and often bullied reporter is actually Paragon Man, the only Actual Superhero! The last survivor of his home planet, he was sent to Earth as a baby... You know what, I'm sure you know how the story goes. What you might not know is that Carlton/Paragon Man is addicted to saving those close to him. His 'loved ones' if he really felt emotions such as love instead of acting like he does. You might think that's a GOOD thing, right?
Well, it would be if all the times he saves his friends and 'love interests' were legitimate. The thing is that to fill his Satiation, Paragon Man secretly plots to put his pals and love interests in danger! Never killing his enemies under the pretense of a 'no killing' code to make sure they can try to take revenge at him through his 'loved' ones -allowing him the chance to save them-, posing with his 'friends' in public as much as possible to make them obvious targets... Sometimes he even secretly helps his enemies escape prison without anyone knowing. (A jailed criminal might find the bars of his cell compromised, not knowing earlier Paragon Man sneaked in to weaken them with his superhuman strength, for example.)
If any of those close to him die he is legitimately distressed and saddened, but not out of any human sense of empathy, rather because it has become harder to fill his Satiation without them.
Although he doesn't fully understand why, he has also realized over the years that he is more powerful when he is mocked and bullied as Carlton Clarke. He hates that fact but plays the role of the meek mild-mannered man who never defends himself, acting in ways that will attract ridicule knowing otherwise he'll find his powers weakened. He would love nothing more than to kill those who torment him under his human identity but he needs them to be the most powerful version of himself.
If that wasn't enough, he has noticed he is also more powerful when he is popular and celebrated by the masses of his city as Paragon Man, something that he does enjoy a lot. As a reporter, he writes countless articles and opinion pieces celebrating Paragon Man to make sure he is at his peak.
PARAGON MAN as a starting AFM Character
Type: Those Who Are Born (Alien)
Nature (d6): Superhero Best Pal. (Fills Satiation if he Rescues a Person Close to Him)
Mind d6
Body d12
Spirit d4
Mask (Reporter) d4: Investigaton d6, Writing d6, Persuasion d6
Powers: Armoured d8, Olympian d8, Flying d8*
Banes: Mineral from his Home World d8, Weakened if Not Ridiculed as Carlton Clarke d6, Weakened if Public Opinion Wanes d4
*Flying is a power from the AFM Companion
Posted by Bruno at 18:10 No comments:

A first look at an OSR TTRPG book I'm currently working on.

Elevator pitch: This post is an invitation to anyone with an OSR Actual Play show (no matter the platform) to contact me to do a crossover story that would span across different participating shows.
More Context:  I have an Actual Play OSR show titled CHRONICLES OF THE CRIMSON HOUND. The quick description of the show is that it's Horror Cyberpunk instead of Medieval Fantasy and that I am the Player Character in my show, with every Serial (A game session edited into episodes) having a different Guest GM. Since most OSR out there is Medieval Fantasy, some dimension-crossing would be involved in the story to make this crossover happen.
The goal is to have a single story that would begin on my channel, then the next episode would continue in the channel of the next crossover participant, and so on. The amount of parts to the story would depend on how many shows would like to participate, but each episode would have the Crimson Hound finding himself in the world of one of the shows that chose to participate, playing with the show's regular group under its regular GM.
There are more details to the logistics of this of course, but I don't want to make this post too long so if you're interested in this idea or have any questions, contact me at <titleoftheshow>@gmail.com or on any of my social media which you can find on the show's blog HERE.
Talk to you soon I hope!
Posted by Bruno at 20:02 No comments: 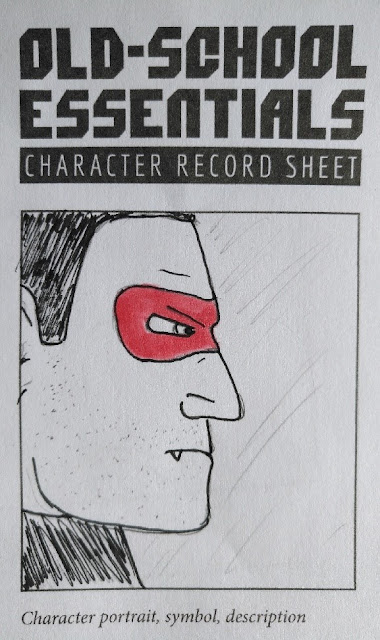 For those who don't follow my other blog, I made a new BX Class that you can find HERE.
Posted by Bruno at 19:15 No comments: 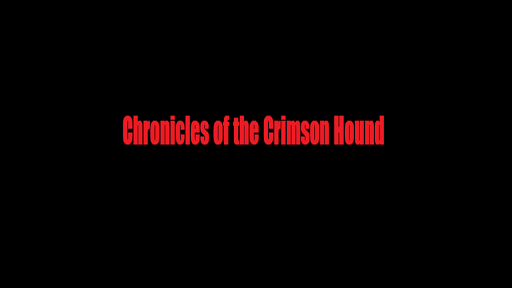 Excerpt from the blog dedicated to the Chronicles of the Crimson Hound:

WHAT MAKES IT INTERESTING

While I will always be playing the titular character of the Crimson Hound in every episode, the show will welcome a rotating cast of different Game Masters, all with their different styles, stories to tell and even house rules. Each of these sessions run by a Guest Game Master will be split into many episodes to create a Serial.

WHAT THE SETTING IS

The setting this series takes place in is a Cyberpunk world inhabited by humans mostly unaware of the supernatural. It is not set in our future and is its own different world, in the same way that most Medieval Fantasy settings are not set in our past.

The stories will mostly take place in the gothic city of Glumengrad, a rainy mix of Gargoyles and Neon. Its citizens, desperate for the distractions of the coolest new tech and upgrades, ignore the dangers of the Supernatural that lie in wait in the shadowy alleys and corners.

That is where the Crimson Hound, masked man of mystery, hunts down the monsters and other unnatural dangers to humanity.

(For more on the titular character, there will always be an updated Character Sheet after every multi-part Serial is done.)

IF YOU WANT TO KNOW MORE

The YouTube Channel for the show is THIS ONE.

OUR OSR WORLDS AT WAR!!! 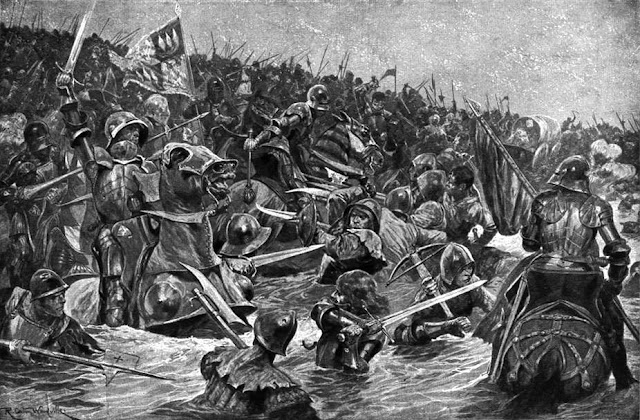 Here's an idea I had just now that really amused me.
I was grabbing a few OSR/system neutral books to read for later, most of them Setting books, and couldn't help but notice that some of the authors of different books I own have had online arguments in the past  where it would be safe to say they dislike each other strongly.
For the sake of good taste, I shall not divulge the titles of the books or the names of the authors. FOR THE SAKE OF BAD TASTE HOWEVER, I had a really fun idea! 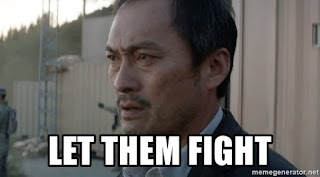 If like me you have different Setting books from authors who don't like each other, grab their respective lands, put them in your Campaign World and have them go at war with each other! It actually seems to me like it would make for a great campaign.
First of all, wars always make a campaign more interesting, thrilling and dangerous. One only needs to look at movies like Yojimbo or A Fistful of Dollars to see how even a small-scale conflict between two groups opens up many possibilities for adventurers looking for coin, a full-on war even more so. That said, when that happens both sides are normally created by the same author and so even if  there is a strong attempt to make both sides different, there's a certain artistic similarity that cannot be shaken off between them. In other words, the two sides share the same DNA and inclinations of the author so to speak, either because both sides are just too similar or because in an effort to not have that happen, the author made sure to avoid any similarities between them. I'm not saying there are no exceptions mind you, just stating the creative pitfalls of such a project.
Anyway, you don't really run into that problem if each side was created by a completely different person with completely different goals and inclinations in their writing. These days these Setting books are not full worlds as much as a land or part of the world to be inserted into already existing campaigns so the work to have them both co-exist in your world should be minimal. All you have to do is extrapolate why they went to war and how each side would react. All those NPCs, locations, magic, etc, how would they react/be used in a war? If these settings were created by authors who disliked each other, it should be fairly easy to find how their worlds, their very creations, also would not see things the same way. In some cases the very real-life conflict that took place can even be projected into the NPCs.
Let them fight!
Posted by Bruno at 16:24 No comments:

What Happens to Joe the Farmer Now? You Tell Me 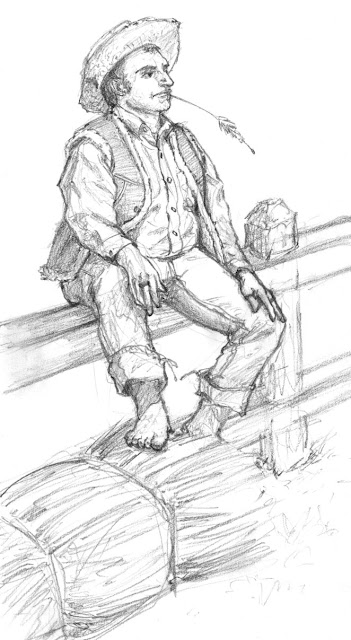 So I made a post about a simple farmer finding a Vorpal Sword in the woods the other day. It was to discuss certain aspects of magic items in a campaign world and how different people would react to them. Discussions were had that I thought were interesting and people elaborated on what they think should actually happen to such a simple farmer finding such an item.
The original idea itself wasn't what I'd call interesting, nor was it meant to be since it was all tongue-in-cheek. But if anyone wanted to elaborate and tell their version of what happens next, here's the place; Simply leave a comment as long or short as you want with your version of the following events in Joe's life. Anything goes, you can add details to how the sword works or behaves (if you decide it should be sentient), you can choose what happens with the cousin, add characters, etc.

The story's beginning itself as presented in the original post is extremely simple, here it is: Joe the Farmer is a Level 0 Commoner with 4 HP. While walking in the woods yesterday, Joe has found himself a +4 Vorpal Sword!  Joe knows it's magic because he's swung it around a few times for fun and he notices that with the magical bonus granted by the sword he somehow seems to know what the fuck he's doing with it. His stance is good, the swings are aimed right. When he tries the same with a tree branch just to see if he somehow picked up fighting skills thanks to his daydreamings, it doesn't work. 'Tis a magic sword alright!Joe is very lucky in that he has a nephew in the city who trades and sells things to adventurers and criminals in the black market. Joe could sell this magic sword, even with the cut his nephew would take it would certainly be enough to retire!

Since previous posts were about discussing everyone's personal views of how such a thing would take place and counterargue each other, I want to clarify that this post is rather for the fun of sharing exactly how YOU would see it go down. Feel free to use gaming terms like I did if you want or to go into full fictional writing mode.

I hope some of you will participate, as the previous quick comments on what would happen to Joe (wether for or against my own arguments) were fun and I would like to read more and see how different people have different expectations for this sort of thing.