Rolling Super-Powers At Random With Daredevil 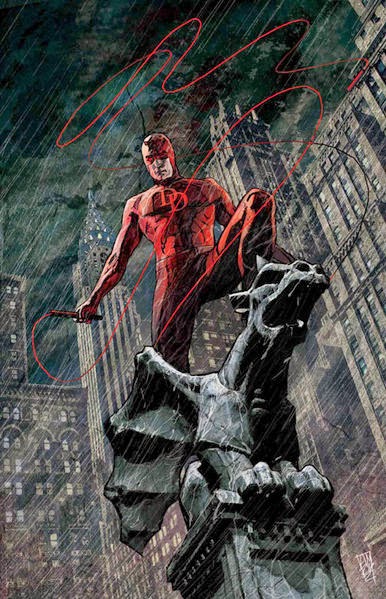 There used to be a time when I thought the best way to handle superheroes in tabletop RPGs was with point-buy or some approximation of that concept, where one chooses what powers one wants. I think that way is still very valid because sometimes you do have a clear idea in your head of what you want to play, but I've been charmed recently by the notion of rolling powers at random.
My best example for that argument is Daredevil, who is very popular lately thanks to his new Netflix series. I mean, he was popular before but this is a new high for the character in main pop culture, in my opinion. If anything, outside the world of comic-book fans he was considered a joke because of that below average movie. But I digress.
No one wants sucky powers. No one is going to choose them on purpose. I mean, sure, some people might, but they are extremely rare. But what if you just have to roll them at random and then, well, roll with them? Then you can believe that whatever player got a character with 'lame' powers will do his or her very best to make them seem cool after all, because it's their character gosh darn it!
You see it all the time in other sorts of RPGs, where for example that one character type who's not good at fighting but has some specialized skills will always try to fit those skills into the game.

"Maybe I can sneak around and find more before we rush into the fight..." says the Rogue.
"If we're going up in the mountains, I have a spell to help us be more resistant against cold." says the low-level spellcaster.

And those things, when done well and with proper effort, work. The fighter-types will turn to the specialized characters when it's time for them to shine and everyone will feel like they have their place.

Now imagine if Daredevil was a character rolled up by a player around a table. He rolls some enhanced normal senses, a radar sense and some lie detection powers. All the other characters have gotten cool powers and Daredevil's player feels like he got the short end of the stick. But he applies himself. Let's say we're using Icons for that game. He ties in the lie detection powers to the enhanced senses thematically, gives them some limitations about working by hearing the sound of someone's heartbeat. (So he can't detect if a robot's lying, for example.) He decides to make him blind, although his radar sense will make that handicap come into play extremely rarely, when it does apply he'll be able to get some Edge for it. He makes him an acrobat ninja, works on making him an interesting character.
The other players are all bragging about their awesome powers while Daredevil's player is working on other ways to make his character cool and gives him a job you wouldn't expect for a superhero, being a lawyer. And so on and so on, until Daredevil is the most exciting character at the table.

Now, of course a player could end up with someone at Superman's power level and also make an interesting character, I'm not saying that superheroes who are too powerful cannot be interesting. Anyone who whines about Superman being too powerful needs to read All-Star Superman, where the first thing Grant Morrison does as if to prove a point is make him even more powerful than before, and then he tells one of the best stories ever written for the character!
And let's face it, except for when players are trying to replicate Batman or something (whose gadgets are a super power when it comes to gaming terms if not story terms!), if everyone chooses their powers you don't end up with a weird mix of power levels in the same group like in all the best superhero stories! You don't get the lines Hawkeye delivers during Avengers: Age of Ultron.

Without randomly rolled powers you don't get someone like Daredevil, who makes a radar and enhanced senses seem like way cooler powers than they should have a right to be.
Posted by Bruno at 20:09 No comments: