My contribution to Dungeon Lord 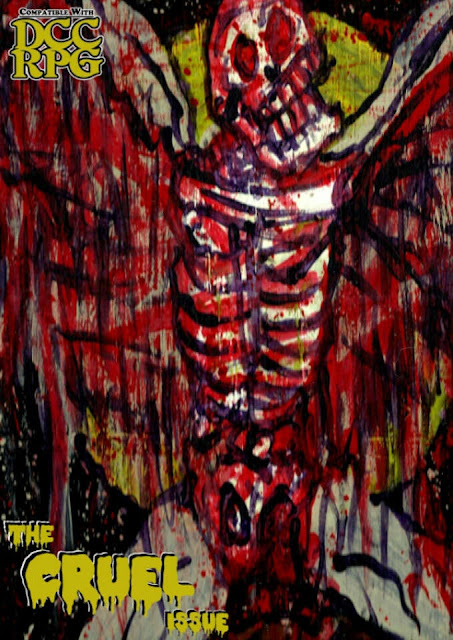 Some years ago in 2016 I was contacted by Terra Frank to contribute to her Dungeon Lord magazine. I worked on it to flesh out an idea she really liked form my blog posts and she decided to make the theme of the issue all about this idea of mine. There was even an interview with me in the mag. It was very cool and flattering.

For a long time I wasn't paying attention to Goggle Hangouts and during that time I missed Terra Frank's private message about the issue being out and how she'd send me a few printed copies once those would be ready. I finally saw the message last month. She sent that message in February 2017. Oops.

She doesn't seem to be on social media much these days so she hasn't seen my reply yet. No printed copies have been made of the magazine so I have received none, there's even a comment at the product's RPG Now page asking if there's gonna be a copy in print. I hope she'll eventually come around to doing those, I like the idea of people being able to hold a physical copy of my first work for the tabletop RPG world.

The irony of it is that since I was getting no replies I ended up buying a copy. I had to pay to read the magazine I contributed to. Don't get me wrong, I'm not blaming Terra for this since at this moment she hasn't even seen my request for a PDF copy and I was too curious for the final result to wait another year. (It seems to be the pacing of our conversation after all.)

I've found a single review of it online so far at DCC Trove of Treasures.

The review is positive overall, I'm happy to say: "Dungeon Lord continues with a kick-ass issue that marks a new high for this zine (in my humble opinion, anyway). The Do-It-Yourself ethos, combined with great artwork, makes the issue a joy to read."

That said, there was some useful and fair critique of some aspects of it, which I want to openly address:

"Note that the prospective judge will probably want to do some prep work before running this...DCs for checks and saves are not given, not every creature has statistics, and some of the mechanics mentioned in the dungeon or the accompanying bestiary are from other systems. There is also, as presented, no way to enter or leave the dungeon, as neither stairs nor passage leads into Room #1."

I have to make a confession, I don't own DCC RPG. It seems like a really cool book but I already own so many versions of D&D that I never got my hands on it. I wrote the dungeon with vague mentions of Saving Throws without using DCC's terms for saves and then asked someone else to convert it to DCC for me. It was a task that was not fully completed it seems. I dropped the ball there, if I was going to write for that system I should have familiarized myself with it and written all those bits myself. If I'm writing the material, I should be the one making sure all the details are right.

As for the entrance missing in Room #1... Whoops, indeed.

I also want to add that some bits from the interview are out of date of course. Chronicles of Death and Dungeoneering's storytelling project where people could vote on the outcomes of a story I wrote is a project I have dropped, but I'm keeping the name and logo for a project that I'll announce in this blog when it's ready.

You can get the Cruel Issue HERE.