Look at this Monster Book I once got for 3$!: 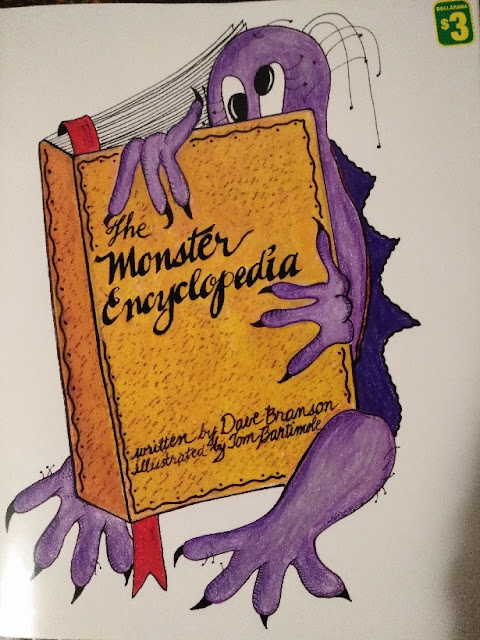 I discussed it a few years back in THIS VIDEO about using Dollar stores to find cool stuff for your D&D games. Hell, I even made my whole DM screen from things bought there. And you might tell me "Hey wait now, that's a children's book, that's not a D&D monster book!"
Well sure, theoretical nay-sayer, you'd be correct... But I'm a big fan of looking for inspiration in unexpected places, as I once also discussed.

To be honest, today I was looking for a children's storybook I could buy for cheap to adapt into an actual playable D&D adventure and share it on the blog. I couldn't find the right book for that specific idea for the time being, but I'm keeping my eyes open. However, one could easily fill a hex map with unlikely inspiration. A lot of monsters from the book seen above interact with the modern world a lot, so they could fit a modern horror game perhaps. But others can work with traditional D&D with very little to no changes to their story and modus operandi.

Don't believe me? There's some legit creepy stuff in there. Let us take a look at the Cry-Alotis: 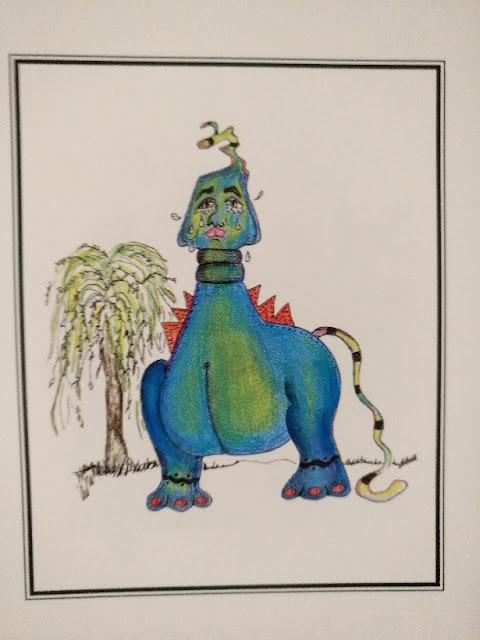 O.k sure, he looks a bit gooffy now (and I'll spare you my thoughts on what the front of his body looks like) but look at that thing next to him; That's a tree. This thing is HUGE. It also has a very human-like face, which is sort of disconcerting if you describe it the right way at the table. Here's the full bio on the guy: 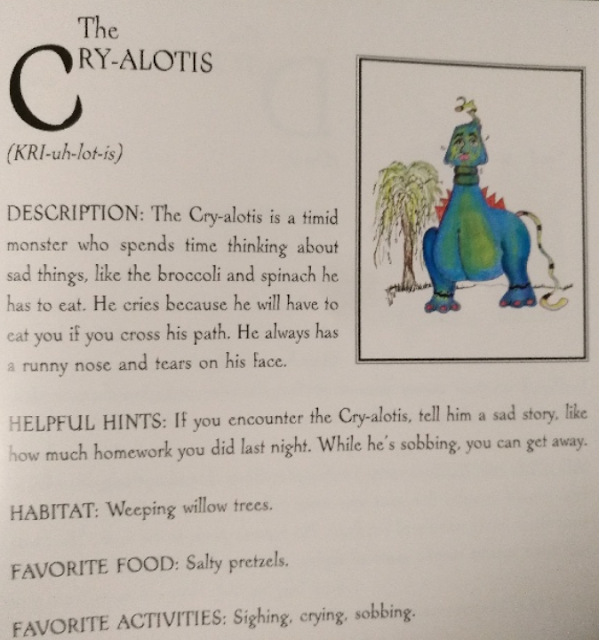 At the beginning of the book in the 'Monster Rules to Follow at all Costs' they mention it's good to always have monster food ready to feed those who may want to eat you. He likes Salty Pretzels so we'll take that into account. O.k then...
Its body makes me think of a T-Rex in shape and size. A T-Rex has 18 HD in the closest OSR monster book I've at hand! (Castles & Crusades:Monsters & Treasure) Not that its mouth would be as powerful from the looks of it. O.k then...

The Cry-Alotis
18HD
Movement: 40 feet
AC: 15
Attacks: Bite 5d4 + Tail Slam 1d12
Special: Grab: Anyone smaller than the Cry-Alotis who's hit by its Tail Slam must succeed at a Saving Throw v.s Paralysis or be constricted by the tail. Only one person at a time can be held like this. Every round the victim can try a new saving throw to escape, but if it's bitten by the Cry-Alotis while constricted, the victim will be Swallowed Hole.
Swallow Whole: While Swallowed Whole, a victim will automatically receive 4d6 Acid damage each round from inside the stomach of the creature. The victim can use small edged/cutting weapons to cut their way out, if they manage to cause at least half the creature's normall HP in damage they will have succeeded in cutting through and the creature will be dead even if it normally would have had HP remaining. All attacks from the inside will automatically succeed. Someone Swallowed Whole can attempt to use a bigger edged/cutting weapon but they must succeed at a Saving Throw v.s Paralysis at -4 before every attempt.
Loves Salty Pretzels: If given the choice between eating humanoids and eating salty pretzels, the Cry-Alotis will always choose Salty Pretzels first. (This should be a little known fact without researching the monster first but maybe Bards could have heard tales using Bardic Knowledge or the similar skill/ability from your system of choice. And if your system doesn't have Bards then ignore that last bit.)
Guilt: The Cry-Alotis feels guilt over the fact that it needs to eat humanoids to survive. (He can survive from certain vegetables temporarily but not in the long run and they are very distasteful to him.) If anyone tries to make him feel guilty or sad in any way, the Cry-Alotis must succeed at a saving throw or spend 1 Turn crying without pursuing anyone. This effect will be undone if the monster is attacked while it's crying however. If a DM feels kind, the Cry-Alotis can even hint at this guilt by talking to itself out loud or by apologizing directly to his victims for what it is about to do.
Reduced Chances of Surprise: Depends on your rules of choice for the math but between its size and its constant crying, it's very unlikely that this creature would surprise anyone.

If anyone uses this guy for their campaign, please let me know!