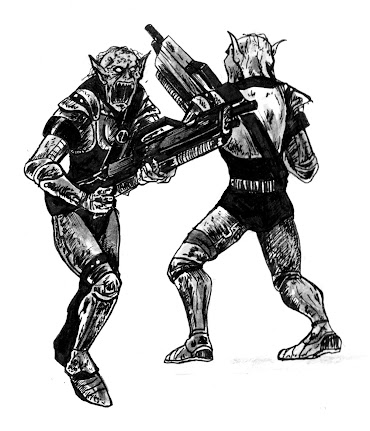 Linnias stood there with the other Ghouls and watched the Vampire Lady Virria Xarras bathe. He and his brethren were her bodyguards and thus followed her everywhere, but the only reason they would stare at her naked body as she stood in her bath was that she demanded it. She was a cruel one, as she did so to mock them all.

Her husband the Vampire Lord Fangar Xarras made sure that all the Ghouls who guarded his Lady had their genitals removed.

Being Ghouls they would slowly regrow the lost members over the next few weeks, so it was a painful procedure that was repeated as soon as they were deemed too repaired. Linnias was a recent servant to the House Xarras and so had only gone through the 'ritual' seven times so far. He had hoped to be transferred eventually to the Ghoul Trooper squads who went out on raiding missions outside of the Xarras City-State. It was beginning to look more and more unlikely that would ever happen.

He had been a Ghoul for a few months so it was a shock for him to learn that apparently, Ghoul regeneration had its limits. The longest-serving Ghouls of House Xarras eventually stopped regenerating what was removed during the rituals. Linnias did not know if it was due to some magic employed during the ritual or a subconscious reaction in the Ghouls who just did not want to go under that knife again. All he knew was that he wished he hadn't ended up serving House Xarras.

Lady Virria stared at him and grinned, thinking she must have been quite the torturous sight to the new servant. Far from it actually. Linnias had always favored the company of men both in life and in undeath. He had early on considered telling Lord Fangar of this to possibly avoid the ritual, but he feared the paranoid Lord would think it a ruse and have Linnias eliminated.

He had to find a way out, but now that he knew their secrets his Vampire rulers would never let him go. It was time to reach out in secret to the enemies of House Xarras and plot their final demise. 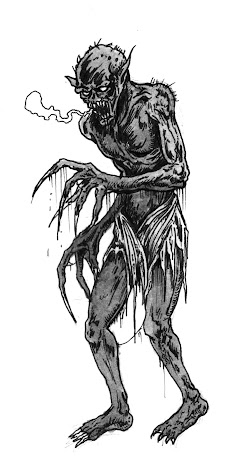 These pathetic Undead of horrifying appearance live under the shadow of their Vampire superiors. Ghouls are disrespected and mistreated by the Vampire elite who command them. They crave human flesh, living or dead. Like all Undead they are cruel beings but amplified by the bitterness and frustration of how Vampires treat them. Most Ghouls would love nothing more than to lash out at Vampires, but they are supernaturally inclined to obey their orders. Still, it does happen that the occasional Ghoul attacks a Vampire in bitter frustration. Such Ghouls are often caught and executed before long. Ghouls are the soldiers, bodyguards, and enforcers of the Vampires. Their ability to withstand the sun also makes them perfect for venturing out of a City-State in search of nomadic tribes of Humans that they can capture and bring back to the City-States.

Prime Requisite: Dex, Str
HD: d6
Alignment: Ghouls can only be Chaotic
Armor: Any
Shields: Any
Weapons: Any
Languages: Common, Demonic
Combat Progression: As Fighter
Saving Throws: As Thief
Max. Level: 13
Bite: Ghouls have a natural bite attack that deals 1d4 damage.
Immunities: Ghouls are immune to Ghoul Paralysis, Diseases, and Poisons.
Ghouls do not need to breathe.
Ghouls do not eat or drink normal food, they crave the flesh of humans, alive or dead.
Infravision up to 30 ft.
Skills: Ghouls have some skills in common with the Thief at the same progression rate. They are Hide in Shadows, Move Silently, and Climb Sheer Surfaces. Note that if a Ghoul wears any armor other than leather, these skills are halved (rounded down).
Supernatural Devotion: Ghouls have a supernatural fear and devotion to Vampires, even if their true, actual feelings are bitter and hateful. As such, they suffer a -2 penalty on all attacks made against a Vampire and on all Saving Throws made against a Vampire's attack.
Ghoul Paralysis: A Ghoul can Paralyze a target once per day. This ability works as the spell Hold Person but only on an individual and the Ghoul needs to make physical contact with the target.
Regeneration: Ghouls can regrow lost limbs in 1d4 weeks.
Ghouls can have their own Pack of Ghouls at Level 10, along with their own home base. This is normally under a Vampire's approval and supervision but not always. (Details to be fleshed out.)
Level Up Table: Starting at level 2 and every two levels thereafter, a Ghoul can roll on the Level Up Table and apply the result to their character. Note: The final version of this Class will have a much longer list.
Level-Up Table
1. Child Soldiers: You now have 1d4+1 human child soldiers at your service. Work out with your GM how this came to be. They are brainwashed into serving you and their Morale when doing so is 12. (For other situations roll their Morale as normal.) You have to pay for their equipment and any other requirements to keep them alive f you choose to do so. They otherwise share the same stat block as a Goblin but without any of the Goblin traits.
2. You have discovered the secret to becoming a Vampire! Work out with your GM how you find this out and what it is that you need to do to accomplish this. See the rules for Becoming a Vampire on page XX.
3. You now have claws. Same stats as the Bite.
4. Every time you eat someone's face there is a chance of 1 in 6 that your own face will mimic the one you ate and make its appearance. It doesn't change your overall appearance and size, not even the rest of your head. Not even your fangs change, only your face. You keep that face for 1d4 hours before it reverts back to normal.
5. (More to come.)
XP to get to Level 2 (Full XP Chart to come) - 1800 xp
Posted by Bruno at 01:01