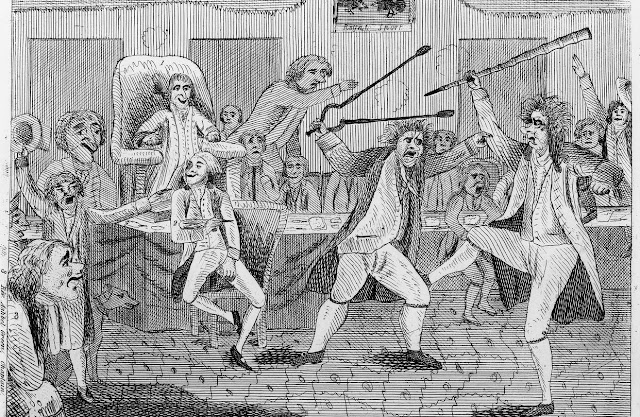 I practice martial arts. (I'm going somewhere related to RPGs with this, bear with me.) I'm certainly no expert and while I'm in better shape than I was in my old videos I'm still no athlete, but I know enough about striking and grappling that whenever I hear some bullshit about martial arts that just doesn't make sense, I am quick to passionately jump in and correct that misconception.

If a girl tells me she knows how to defend herself because she took "Like, three self-defense classes two years ago" I am quick to explain to her that none of it will come back to her if she's actually being attacked. In an actual fight you're not gonna recall the complex moves unless you've practiced them into muscle memory. And I don't do this to take someone's confidence away, but so they're actually educated on the realities of physical confrontations. I've been in a few actual dangeorus fights and shit does not go as planned and you have to be used to fighting enough to adapt, no one will take the specific positions you learned and no one will wait for you to do it on them while they remain still and their buddy will try to sneak up behind you in the meantime...  Anyway, if you want to learn how to defend yourself, well go actually practice a martial art that works, just don't delude yourself into thinking that practicing a few sketchy aikido moves in your yoga pants will actually teach you how to deal with a guy throwing punches at you. Lots of women way smaller than me can choke the hell out of me in Brazilian Jiujitsu. And arm-bar me. And plenty of other uncomfortable nasty things. And they put the time and effort required to be able to do that to a stronger guy and they will be more efficient in an actual fight than miss 'self-defense weekend in yoga pants'. Clearly someone is doing it right and the other is doing it wrong, or not even trying at all yet claiming to know what they're doing. (I'm getting to my point.)

I once got into a respectful but long-winded argument on Facebook with a trans friend, where I argued one isn't automatically a transphobe for being against the notion of a woman who used to be in a man's body fighting other women who were always so. I argued that there is a huge advantage in the male physique when it comes to fighting. (Yes we're still friends.)

The cynical side of me is almost expecting a comment about how I'm talking about this to brag or something, so I'll reiterate that I am no fighting genius nor am I even in great shape. Fighting just happens to be one of my hobbies that I'm passionate about, the same way some people who read comic-books and greatly enjoy them aren't necessarily great writers or artists but can still analyze a story and determine which comics are good or not.

What I mean to bring up with this is that when it comes to martial arts, I will get into long-winded arguments and yes even extremely touchy subjects with friends. Because someone getting it wrong, to me, means someone might potentially get hurt. Someone might have an unrealistic expectations of their skill in an actual confrontation, try some weak-ass bullshido move and then get the shit beat out of them (sometimes even by non-fighters who are just throwing their arms around windmill-style) because they wasted time on something that doesn't actually work. To me, getting it wrong in that specific hobby (or sport, or whatever you want to call it) means something could potentially go REALLY wrong. It has consequences and I would consider it wrong to not try to help someone with the wrong ideas stuck in their head.

O.k, and now to RPGs, and more specifically the OSR. If someone thinks they're an awesome Game Master and their blog is full of what you'd personally consider bad ideas, are people getting hurt by it? I'll elaborate. I follow many blogs, I obviously post my own opinions on stuff. There's only one time that I got really angry online about our hobby where someone was outright showing signs of  intolerance, in my opinion. But at that point what angered me wasn't how to approach the game as much as the fact that someone was basically complaining about gay people wanting equal rights. I called bull. In a later post I did regret having insulted the guy instead of simply counterargueing him because you don't change people's minds by insulting them, but what's done is done and unlike him I won't edit the post to sweep it under the rug. (He went further and deleted the post I was replying to after the backlash.)

Anyway, so the OSR was initially born of contrarians. I think anyone denying that is deluding themselves, but that's just my opinion. It wasn't born of people tired of spending their money on RPG books who just wanted to use the ones they already had, because if that was the case they wouldn't buy the new OSR stuff. No, it was born of contrarians who looked at the official D&D establishment and thanks to the efforts of Ryan Dancey and the OGL, had the tools to go "You know what, I don't like what you're doing, I'll do it myself!" And that's awesome. And a lot of them were fair to the official game and returned when 5e was more like it. With all the choices they had out there, they didn't have to, but they recognized the game they loved once more and encouraged it again. (I stuck with my house-ruled Castles & Crusades but if I didn't already have that I would have made the switch to 5e too.) The contrarians won.

And maybe that explains my observation. A lot of OSR people online are passionate about our hobby, to a fault. Too many of them, even those creating material I greatly enjoy, seem to take it personal and attack others as soon as someone disagrees on how to handle their games. Like there's a fear if someone gets it wrong, things will go back to being 4th edition. (A bad thing for most people in the OSR, but if you like the game I have nothing against that.) But unlike martial arts where things either work or don't work, and where mistakes and delusions can mean actual physical danger, if someone is playing the game 'wrong' and they're still having fun... Who the fuck cares? Yes it's important to debate the things we're passionate about but why take it PERSONAL? Sometimes I read some of the comments and I can tell some commenters were angry at each other (and sometimes at me). It's like the whole community has a lingering trauma from when D&D betrayed them and they'll never let it happen again and they know what this hobby and everyone else in it needs to do.

For example, I personally hate the notion of dismissing the use of XP and leveling up players per amount of games played or when GMs "think it's time" because it removes a certain amount of agency from the players, but that is my personal opinion and I will debate someone over it online because it's fun to exchange ideas, I would never post my opinion as an attack. I would never write something like "Oh sure, if you enjoy making lazy decisions where your players have less choices, go ahead."

Holy crap do I see the rumor mills and personal attacks between one blogger and the next, even indie authors. I'm really not interested at all in those aspects of the hobby's blogging sphere and yet it seems unavoidable. When I try to get clarifications about people's claims about this person or that other because the other option would be willing ignorance on what goes on in the hobby, it's rarely as cut and clear as they would love it to be, and this is coming from someone who hates staying neutral for the sake of it and will take sides once informed. But I also like my battles to be worth it, you know?

Sure if someone did something truly WRONG in real life then I'll pay attention, but when it comes to stuff like rules, how people roleplay or rollplay (do you describe what you do to the trap or just roll a die???) their expectations of how a campaign would work or even just their general way of being or living... Chill, there's no reason to get carried away, no one's getting hurt. The contrast between two of my hobbies is day and night to me regarding its consequences if applied improperly, and even then I realize that my 'right way' to roleplay is not everyone's. Fighting is not a matter of opinion, it's a matter of results. In its own way, so are RPGs, and in both cases you cannot debate results. For RPGs, the question is simply; are you guys having fun with it?

If they're having fun, no they're not doing it wrong or at the very least they're not your personal enemy.